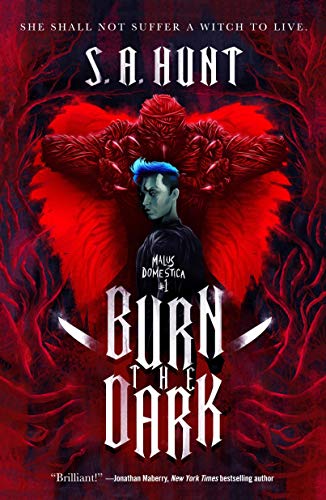 I thank Netgalley and the publisher for this book, received in exchange of an honest review.

Robin Martine is not the usual girl. She’s an orphan, she can use swords and knives, she runs a Youtube channel, she travels around America recording her adventure in…witch killing. Robin is a witch hunter and the witches are not like Sabrina Spellman or any kind witches seen on television. They are cruel, they are known to siphon life to them through spells and sacrifices and they are immortal. They killed Robin’s mother, Annie, blaming her violent father. After being instituzionalized, because Robin spoke the truth about the witches and doctors made her believe she was crazy, filling her with medications and shock therapies, she’s rescued by a family friend, Heinrich. He reveals her the truth about witches and starts training her. Haunted by a green eyed monster, for years, Robin fights against supposed hallucinations and spells, while trying to do her job. The story is built with flashbacks and memories and starts when Robin comes back to Blackfield, in her old city. For Robin, coming back home means reconnecting with Joel, his old best friend and to know Kenway,with whom Robin right away get along, dragging both of her friends in her caotic and dangerous life and revenge. Her path crossed Wayne’s and his father, who they just moved in her old house. While she’s keen on getting her revenge on the Coven that killed her mother, Robin starts to understand she may have been underestimated the situation.

I really liked this book. Robin is a great main character, funny, determined, stubborn and keen on discovering the truth about her family, her mother, the creature that haunts her. She wants to kill the coven that murdered her mother, the dangerous Lazenbury. Joel is a fantastic and ironic best friend and I love her relationship with him and how she found someone in him and Kenway to rely on. Kenway is another amazing character. He’s a veteran, he went through hell and back and, like Robin, he’s full of memories and scars. I loved how Robin’s plot crossed with Wayne’s, the new kid. I like Wayne, a lot. The author did a fantastic job writing his character. Wayne lost his mother to cancer, his father went through a bad moment, drinking and, deciding to move from Chicago to a little city meant for him changing his whole life, school and friends, while still grieving for his mother. He’s a strong character, friendly, smart and I liked reading about he having new friends. He was forced to grow up faster when his father started to drink. I found really sweet his habit to put her mother’s wedding ring near his eye and see through it.

I love how important that ring became in the book., too. Leon, his father, a teacher, found himself involved in witches, monsters and spell, involving witch hunting, magic rings and creature from other dimensions. I liked reading about Robin’s mentor and savior, too, Heinrich, even though he’s less present in the book and I hope to read more about him in the sequel, because he seemed an interesting character. The book is captivating, full of twists and revelations and it kept me hooked until the end. It was amazing reading the multiple POVs, Robin’s, Joel’s, Wayne’s, Marylin’s and see through the “villains’ ” eyes too. I liked reading about witches, their powers and dryads, goddesses and so on. I’m really happy to have read this book and I can’t wait to know more about Robin’s story.